I know that people are entitled to different opinions on brussels sprouts, but I love them so much I have confused them in my mind with junk food, and gobble them up like I'm going to get caught. If you haven't had them since you were a kid, now's a good time to give them a chance.

Today I made a simple "hash"- I fried some potato cubes in oil until browned, then tossed in messily sliced brussels sprouts, diced apple cubes, some chopped almonds, and salt and pepper. When everything was cooked and kind of burnt, I squeezed half a lemon on top. It was so heavenly- nutty and fresh and slightly sweet. I recommend you try it at home with whatever random ingredients you have at home. I myself might eat the same tomorrow.

It was definitely a nice lunch to prepare for an evening consisted of the sisyphean task of standing around holding up a large heavy board, and occasionally turning in time with some 30 other folks, all while remaining perfectly silent and still for 2 hours. (Part of an art project I mentioned yesterday, that I am getting paid for.) But tonight was the actual "performance" and actually, people really seemed to dig it! You see, we made like a maze with these boards, that changed in tune with the music to lock some people in and some people out. Since I was directed to stare only at the board, I didn't see people's reactions, but they seemed enthusiastic afterwards. And who can complain at getting paid to participate in real live art? I think I'm going to add to my cv... T: lawyer, performance artist, admirer of brussels sprouts.

Song of the day: The Clash- London Calling
Posted by T at 5:25 PM

Mmm I love all your pics. They all look so yummyyy!

I completely echo the Brussels sprouts "junk food" confusion sentiment - I've just never been able to put it as eloquently as you did ;)

so awesome on people dig'n the performance piece, T! it does sound really neat! brussel hash is brilliant, my friend. and i'm kicking myself for never thinking to make such awesomeness with my favoritest of vegetables. ah ha ha!

made a version for dinner tonight and it was INCREDIBLE. thanks for the idea.

Made this last night and it was DELICIOUS!!! Great mix of textures and flavors. Did my best to figure out portions and here's what I did:

Hey thanks Mama Bee! Sounds right to me! 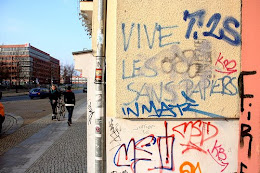 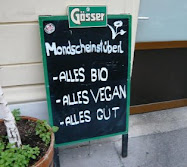